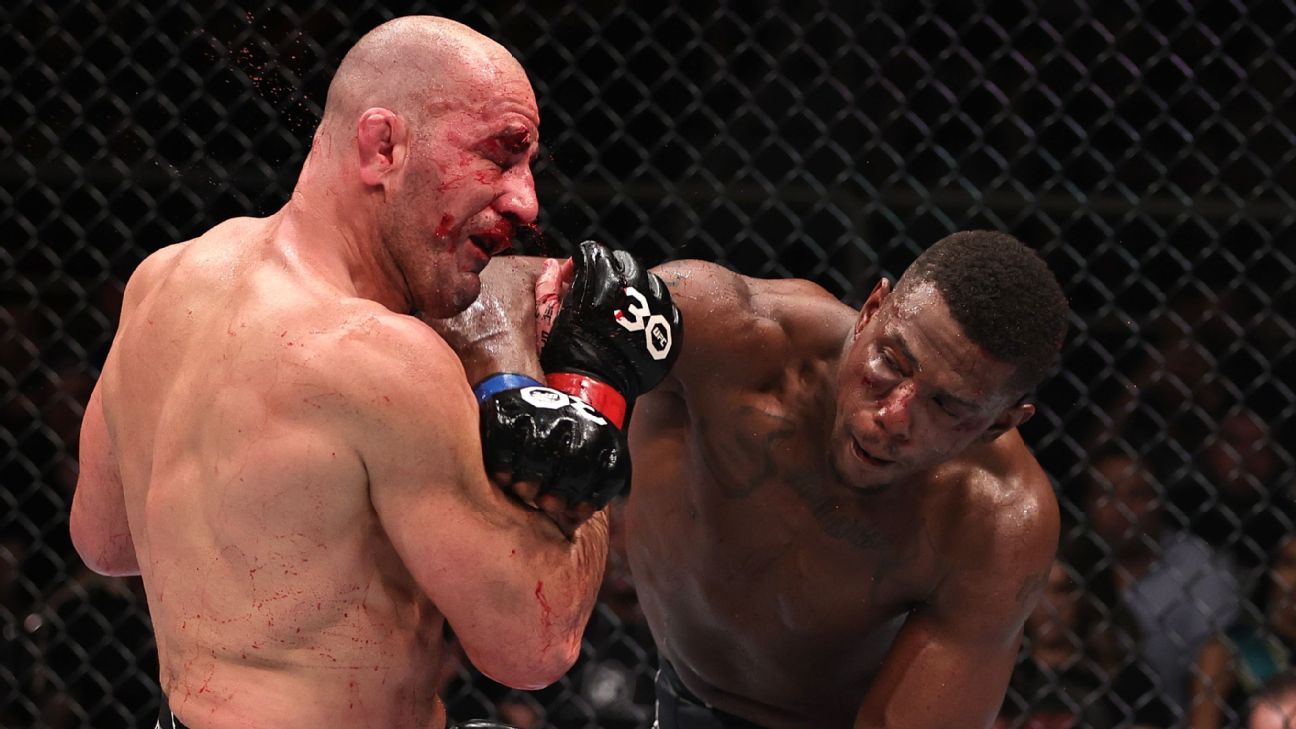 Jamahal Hill walked slowly toward his corner, and in a moment, the realization came to him: He had just become a UFC champion.

Hill, being embraced by his coaches, started crying and then yelling before the decision was even read by ring announcer Bruce Buffer, because he won in dominant fashion. He blasted Teixeira for five rounds with wicked punching combinations and head kicks, bloodying the former titleholder.

“Anything is possible,” Hill said in his postfight interview. “Hard work, dedication, accountability. Don’t let nobody tell you nothing. Too many people told me I couldn’t do it, that it was impossible. I needed to do it in one round. I couldn’t go five. What the f— you got to say now?”

Afterward, Teixeira, who has been one of the best 205-pound fighters in the world for well over a decade, announced his retirement after 21 years as a pro fighter. Teixeira will end his career with the most finishes (13) and most submissions (7) in UFC light heavyweight history.

This bout was put together quickly in the minutes after UFC 282 last month when a vacant title fight between Jan Blachowicz and Magomed Ankalaev went to a split draw. Jiri Prochazka relinquished the belt in November, prior to what would have been a December fight with Teixeira due to a bad shoulder injury.

Coming in, ESPN had Teixeira at No. 2 and Hill at No. 8 in the world at light heavyweight.

Hill hurt Teixeira badly in the second and third rounds with head kicks and hard punching combinations. Teixeira, though, kept marching forward the whole way despite two nasty cuts over both of his eyes. Teixeira even landed a takedown in the fifth round and had success from top position. But Hill was able to sweep and then get up, landing more punishment to Teixeira.

Hill landed a UFC light heavyweight record 232 significant strikes, the fifth-most ever landed in a UFC fight. Teixeira landed just 75 significant strikes. “The dude is tough as bricks, man,” Hill said. “I don’t know anybody who can take what I throw and keep going. … I heard [referee] Marc [Goddard] say keep fighting. Goddammit, he is.”

Hill (12-1, 1 NC) has won four straight fights. The Chicago native, who trains out of Michigan, had finished four out of his five UFC wins coming in via KO/TKO. Hill, 31, stopped Thiago Santos via fourth-round TKO in his most recent bout last August. He is the first Dana White’s Contender Series alum to win a UFC title.

Teixeira (33-9) dropped the light heavyweight title to Prochazka at UFC 275 last June in the best fight of 2022. The Brazilian-born fighter, who lives and trains in Connecticut, was on a six-fight winning streak before that loss. Teixeira, 43, became the oldest first-time champion in UFC history when he beat Blachowicz to win the belt at UFC 267 in October 2021.

In his postfight interview, Teixeira said he saw the Brazilian crowd throw things at UFC flyweight champion Brandon Moreno earlier in the night after Moreno beat Brazilian fighter Deiveson Figueiredo. Teixeira asked the crowd not to do the same thing to Hill. “I’m going to walk back with him,” Teixeira said. “I want you to respect him. He’s the champion.”

‘Blood will be on hands’ of Congress if bill limiting police officer immunity not passed, Tyre Nichols’ mum says
Europe is set to ramp up its oil war against Russia — and markets are bracing for more disruption
Shapps tells British Steel owner redundancy plans are “unhelpful”
How US shot down China’s ‘spy balloon’ with a single missile – and what was likely on it
Oil giant Shell posts highest-ever annual profit of $40 billion