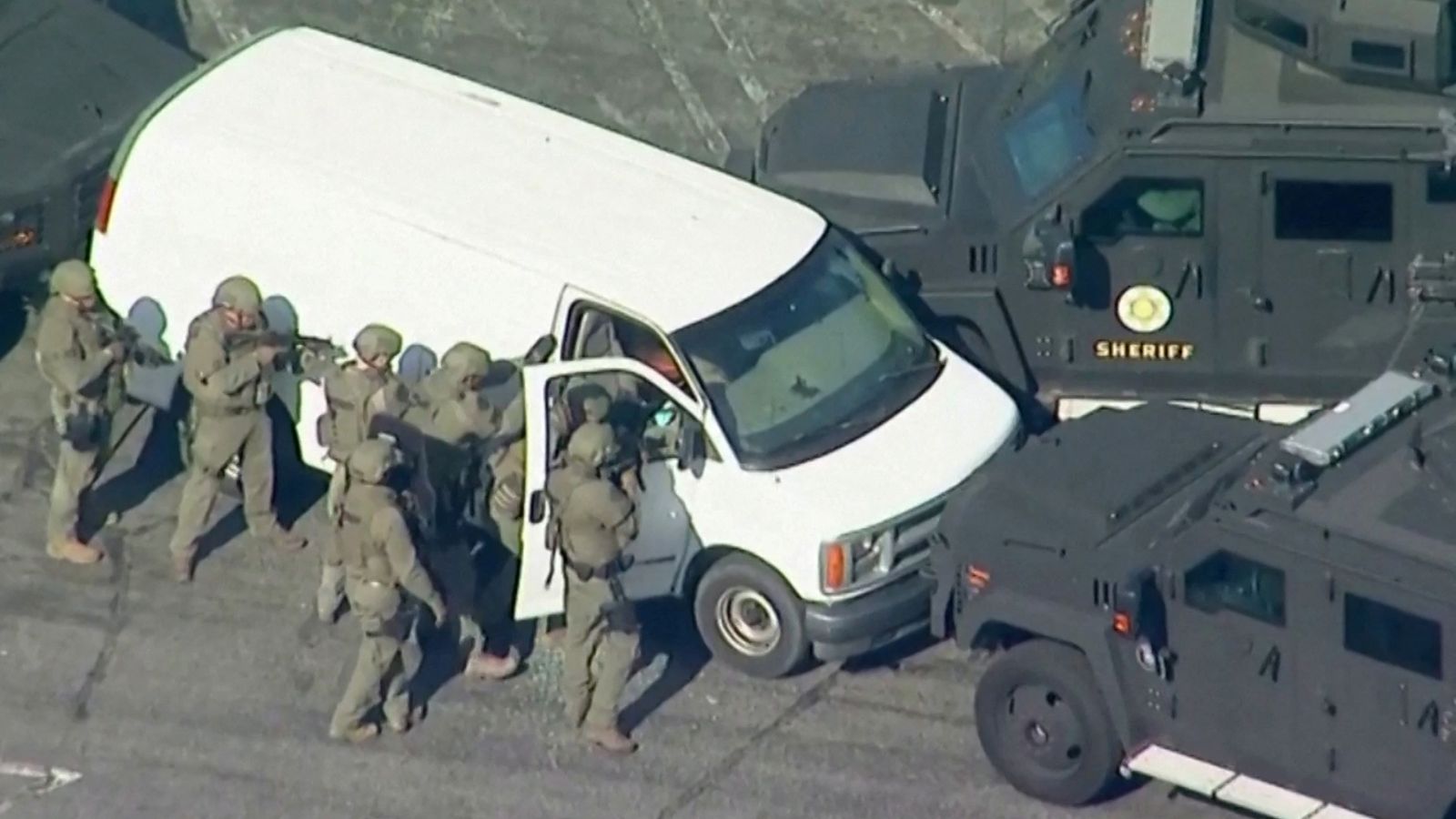 A man suspected of killing 10 people in a Chinese New Year mass shooting in California died of a self-inflicted gunshot wound in his van as officers closed in.

Los Angeles County Sheriff Robert Luna said the man was found dead in the vehicle he used to flee the scene of an attempted second shooting.

The suspected gunman was identified as 72-year-old Huu Can Tran.

Mr Luna said no other suspects were still at large.

The gunshots were mistaken by some for New Year fireworks, according to Tiffany Chiu, 30, who was celebrating at her
parents’ home near the ballroom.

“A lot of older people live here, it’s usually really quiet,” she told Reuters news agency. “This is not something you expect here.”

Read more:
A day in America is more likely to see a mass shooting than not
How do US gun laws work?
Listen: America’s complicated relationship with guns

What do we know about the suspected gunman?

His name was Huu Can Tran, 72. He went on the run and shot himself dead as police closed in on his van in LA on Sunday.

He lived at a mobile home park for over-55s in Hemet, California, about 65 miles east of where the murders took place.

Police are looking at how he acquired his gun, which had an extended large capacity magazine.

An ex-wife of Tran’s told CNN that she met him at the Star Ballroom Dance Studio – where the shooting happened – about 20 years ago, and that he used to give lessons there.

The woman, who did not wanted to be named, said he was never violent to her but would easily get angry.

A long-time acquaintance of Tran’s said he would go to the studio almost every night in the late 2000s and early 2010s.

They told CNN he was “hostile to a lot of people there” and that Tran had claimed the instructors at the time didn’t like him and said “evil things about him”.

It’s unclear if Tran had been to the dance studio in recent times and if he knew anyone who was inside during the shooting.

Then, 20 to 30 minutes after the first attack, a man with a gun entered the Lai Lai Ballroom in nearby Alhambra, and people wrested the weapon away from him before he fled, Mr Luna said.

The authorities believe the two events are connected but have offered no details about a motive.

The shooting has sent a wave of fear through Asian American communities in the Los Angeles area and cast a shadow over Lunar New Year festivities around the country. Other cities sent extra officers to watch over the celebrations.

The massacre was the nation’s fifth mass killing this month.

Monterey Park is a city of about 60,000 people on the eastern edge of Los Angeles and is composed mostly of Asian immigrants from China or first-generation Asian Americans.

The shooting happened in the heart of the city centre where red lanterns decorated the streets for the Lunar New Year festivities. A police car was parked near a large banner that read “Happy Year of the Rabbit!”

It is immediately obvious that Monterey Park is unlike anywhere else in California.

The small city of about 61,000 people is eight miles east of downtown Los Angeles but could be a different country, with its Chinese supermarkets, dumpling restaurants and shop signs written in Chinese alongside English.

More than 65% of the people who live here are Asian American. It is, as one scholar described it, “an ethnic enclave in the suburbs that thrives because it refuses to assimilate, instead unapologetically catering to its own immigrant community”.

Still, it is not immune to the most American of tragedies. But even as Monterey Park comes to terms with 10 people shot dead during a ballroom dance class, there is a quiet and peaceful resolve.

In front of a police cordon on the street where the massacre took place, a group of people kneel and pray, asking their God for strength.

The celebration in Monterey Park is one of California’s largest and had attracted tens of thousands of people throughout the day.

Two days of festivities, which have been attended by as many as 100,000 people in past years, were planned, however officials cancelled Sunday’s events following the shooting.

President Joe Biden condemned the killings in a written statement and said he had directed his homeland security adviser Elizabeth Sherwood-Randall to mobilise federal support to local authorities.

“As we await more crucial information from law enforcement, I want to assure the community of Monterey Park and the broader area that we will support you in every way we can,” Mr Biden said.