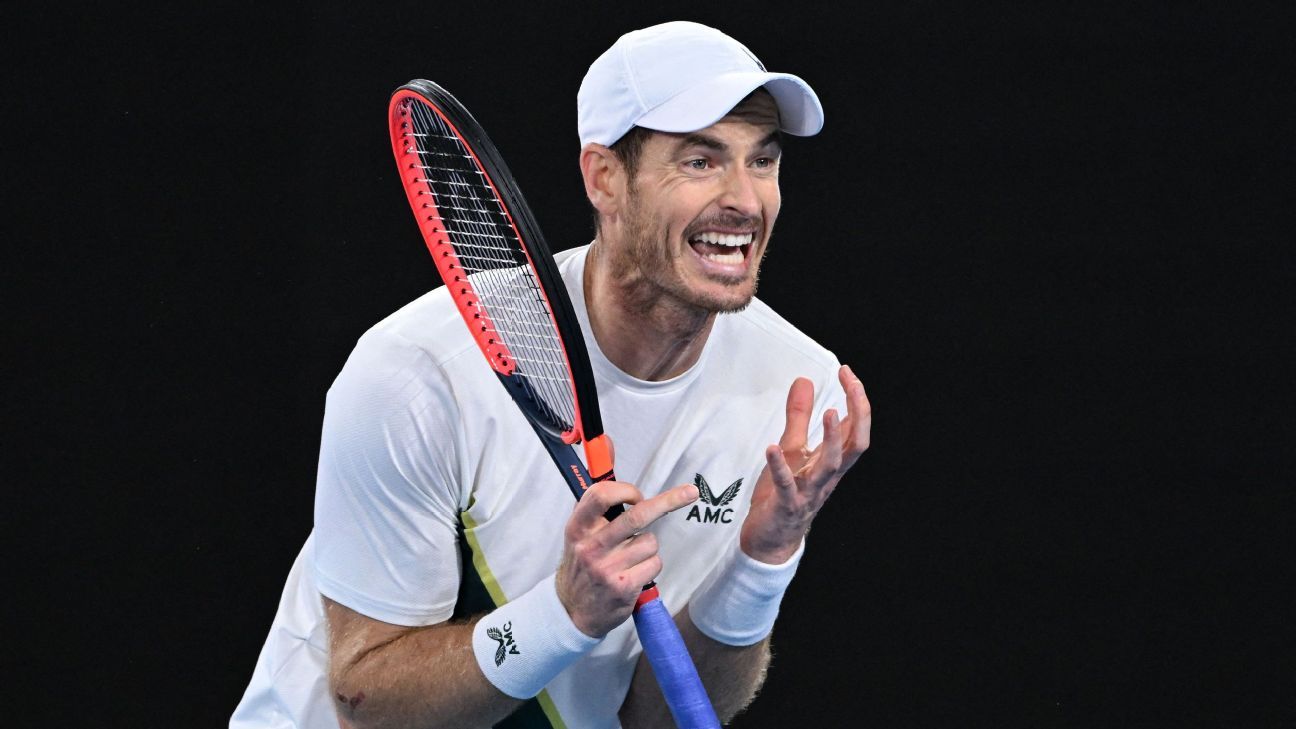 He continues to thrill and grind, and every time he defies logic on the court, you feel Britain adores him even more than thought possible.

Thursday afternoon in the UK was another occasion when we were gripped by Murray once again as he played his marathon five-set match against Thanasi Kokkinakis in Melbourne. The experience of watching him claw his way back from two sets down thousands of miles away against someone nine years his junior blurred nostalgia, hope and the thrill of the pleasant spectacle. But above all, there were the familiar emotions prompted by his fortitude: something along the lines of pride and admiration.

He was playing a day ahead of the UK, but his mind has always been a step in front of the rest of us.

Murray could’ve called it a day back in 2019. No one would’ve thought less of him. They played the retirement montage at John Cain Arena after his first-round defeat to Roberto Bautista Agut at that year’s Australian Open. His hip was in pieces. He had a foot and a beaten body already a step through the door of retirement.

As he took time away to have hip resurfacing surgery, his first goal was to be pain-free enough to walk up the stairs. Then he saw that old, mangy tennis ball in his house and took a racket to it. That wasn’t so bad. So he returned to training and the hip held up. Singles? Perhaps too much — so it was doubles first. That worked. So it was back to singles again, and by August 2020 he was back in the US Open first-round draw. Confounding experts and armchair critics alike, there he was, the part-mechanical marvel back on the court, the body granting him an unexpected epilogue.

And so four years on from that match against Bautista Agut — it was one where you focused on every single minute detail, trying to take snapshots of the final throes of the match, believing it to be his last — we’re back here again, with Murray up against the same opponent in the third round of the Australian Open.

This run is no fluke. Murray felt good coming into the tournament, and spent the preceding weeks in his own tennis boot camp in Florida working with Ivan Lendl. He was relatively pain-free and confident. But given the fragility of tennis’ relationship with fate, we were one backhand away from never being granted this additional chapter. Matteo Berrettini — who dispatched Murray at the US Open — had match point in the fifth set in the first round. With Murray scrambling, Berrettini had open court to aim at, but stuck it into the net. From there Murray went on to prevail 6-3, 6-4, 4-6, 6-7 (9), 7-6 in four hours and 45 minutes. Phew.

But had Berrettini slotted tennis’ equivalent of an open goal, it would have robbed us of Murray’s remarkable 5 hour, 45 minute marathon match against Kokkinakis, including one of the most logic-defying points we’ve ever seen from him. It came in the third set — Kokkinakis two sets and a break to the good, but Murray on break point.

In his second life — effectively a sequel to the one that came before, when he won three Grand Slams — his defensive game can match with the best of them, his footwork is still astonishing and while his legs may be heavier than they used to be, he astounds.

Four times Kokkinakis had the chance to put Murray away. Each time Murray scrambled, ran and returned to sender, eventually triggering an unforced error and winning that break of serve. As Kokkinakis pummeled his racket into the ground, Murray looked to the crowd for recognition, the lactic acid mixing with the fire of momentum.

Three or so hours later, and Murray had two match points. Kokkinakis sunk to his knees in preparation and resignation, bewildered at how he’d failed to send the knight away on his shield. And two minutes later, after three guttural roars to celebrate the 4-6, 6-7 (4-7), 7-6 (7-5), 6-3, 7-5 victory — the 11th time Murray had managed to win a match from two sets down — he told the spectators remaining on Margaret Court Arena (and the open-mouthed fans around the world in more hospitable time zones), “I have a big heart.” And therein lies Murray, succinct in words and actions, but perhaps the most fascinating British sportsman in recent memory.

Since he has been in Melbourne this year, he hasn’t given any thought to that match against Bautista Agut from four years back. He tackled those emotions last year — taking in the surroundings and recognizing what he might’ve lost, but still the opportunity ahead. This is the second time he has reached the third round of a Grand Slam since 2017.

Murray’s goals shift as he chases his first spot in the quarterfinal of a Slam in six years, but still he keeps on walking up the mountain. As he said after that win against Kokkinakis, “I just rely on that experience and that drive and that fight, and my love of the game and competing and my respect for this event and the competition.”

Murray 2.0 has moved us to watch his game beyond a lens of nostalgia and is instead embracing the unknown while encouraging us to do the same. It has allowed his journey to come full circle against Bautista Agut back in Melbourne. There could be tears shed again, but these will be on Murray’s terms, rather than a collective sadness at what we thought was farewell.

Murray is not yet ready to curl up on the sofa. That tennis ball still needs chasing.

British Steel draws up plan for 800 job losses amid government funding talks
Business secretary tells Ofgem to toughen up over handling of prepayment meter scandal
Saudi Aramco backs Brooklyn-based startup turning ammonia into fuel
‘Those fears are very real now’: Rupert Grint on Servant and Knock At The Cabin – and dealing with real-life scares
NIU launches a $100 scaled-down version of its electric scooter for kids