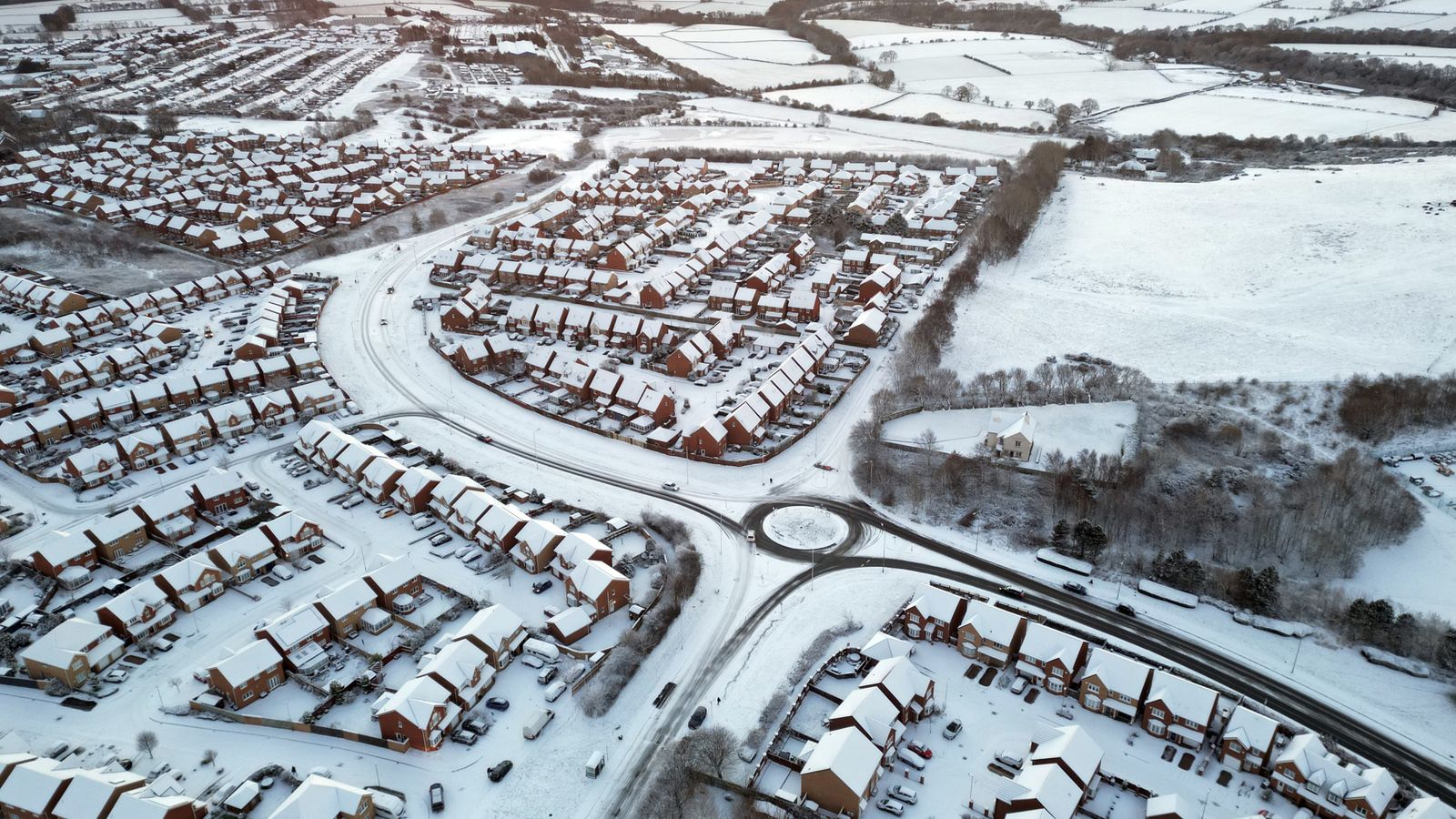 Snow could hit parts of southern England within days, with forecasters warning the Arctic blast will continue into next week and may see temperatures plummet as low as -15C.

The Met Office has issued a yellow snow and ice warning for London and the South East from 9am on Sunday to 9am on Monday, saying two to five centimetres of snow could fall quite widely, and up to 10cm in some places.

“Snow may push in across parts of east and southeast England, leading to a risk of travel disruption especially on Monday morning,” it said.

Spokesman Grahame Madge said: “The outlook for the UK remains cold at least for the next seven days, with the potential for this to continue even longer.”

Temperatures dropped as low as -9C (15F) in Benson, South Oxfordshire, overnight, and Sky News weather producer Joanna Robinson said -15C could possibly be reached in Scotland where there is snowfall and clear skies over the coming week.

Get the latest 5-day forecast where you live here

The Met Office had already issued several yellow weather warnings for snow and ice which are in place for parts of Scotland, Northern Ireland, Wales and South West England.

In addition, the UK Health Security Agency has issued a level three cold weather alert covering England until Monday – and says vulnerable people should heat their homes to at least 18C, wear extra layers of clothing, and eat hot food to protect themselves.

As parts of the UK are hit by freezing conditions, those on the lowest incomes in England and Wales will receive a £25 cold weather payment.

The winter payments are triggered for eligible households where the average temperature has been or is forecast to be 0C or below over a period of seven consecutive days.

She said: “The Arctic air is across us now, bringing wintry hazards that could last for most of next week, but there will be plenty of sunshine.

“Like recently, temperatures will widely drop below freezing at night, reaching -4C to -8C under clear skies, and -10C is likely in some prone cold spots.

“And it’s staying cold in the day, with temperatures generally 2C to 4C, but freezing in some places.

“Disruptive freezing fog is looking increasingly likely over the weekend, especially in the south.”

The Met Office has extended a yellow weather warning for snow and ice in northern Scotland until 12pm on Sunday.

It warned some disruption is likely due to icy surfaces in coastal and northern England and parts of Wales and Northern Ireland where yellow warnings for ice have been issued for Friday.

The icy conditions in coastal England and parts of Northern Ireland and Wales are expected to continue into Saturday.

The forecaster’s meteorologist Alex Deakin said earlier this week there was a potential for “significant” snow in parts of England and Wales in a predicted weather model for next week, which shows a low pressure system heading towards the UK.

He added: “The weather patterns don’t shift too much by the time we get to Monday, we’ve still got the cold air in place, cold weather fronts around, some freezing fog and some ice as well.”

Diplomatic row between China and US escalates as Pentagon says second ‘spy balloon’ being tracked
US slows pace of rate hikes again as Bank of England prepares its next action against inflation
Alec Baldwin to make first court appearance over fatal Rust shooting this month
British Army: ‘The army is in a dire state’ – Tory MP and Defence Committee chair
Harley-Davidson’s upcoming LiveWire electric motorcycle delayed until later this year