Downing Street has defended Suella Braverman after she flew to an overcrowded migration centre in a £3,500-an-hour military helicopter.

The home secretary avoided questions from the press as she met the Dover coastguard and travelled to the Manston facility in a Chinook.

At one point in recent days, as many as 4,000 people were being detained at the site for weeks – even though it is only intended to hold 1,600 for no more than 24 hours. 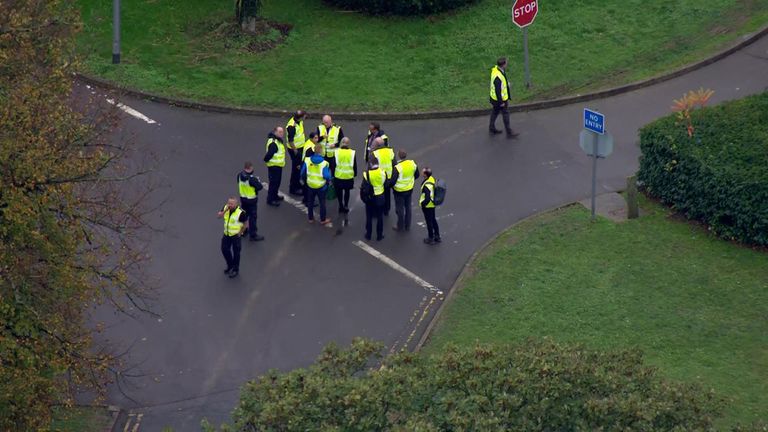 The government claims more than 1,000 migrants have been moved from Manston this week, meaning 2,700 people remain at the facility.

A No 10 spokeswoman said the home secretary was getting an update on operations on the ground which “obviously involved operations in the Channel”, so she “travelled on a military aircraft to see the area of operations at sea”.

A Home Office spokesman reiterated the point, saying she travelled in the aircraft with Clandestine Channel Threat Commander, Dan O’Mahoney “to get a view of operations in the Channel first hand”.

Ms Braverman spent about two hours at Manston and left using a side gate – away from the journalists who were gathered at the main entrance.

While North Thanet’s MP Sir Roger Gale was also seen leaving the processing centre, Dover MP Natalie Elphicke said it was a “great pity” that the home secretary had not taken the opportunity to meet other Kent politicians.

“The small boats crisis is not just in the migrant processing facilities, it is on our Kent beaches, schools, services and housing,” she added.

Chancellor Jeremy Hunt later said Ms Braverman was prepared to “face the music”, even though she avoided questions from the media throughout yesterday.

Ms Braverman added: “This is a complex and difficult situation which we need to tackle on all fronts and look at innovative solutions.

“To break the business model of the people smugglers, we need to ensure that the illegal migration route across the Channel is ultimately rendered unviable.”

An asylum seeker who says he was among a group of migrants left stranded in central London on Tuesday night has said they were not told where they were going by officials.

The man – who gave his name as Hasibullah from Afghanistan – said he was among a group of 45 migrants who were removed from Manston and taken to Victoria coach station.

He told Sky News: “They tell us ‘you go by bus’. We know that we go to London but we don’t know where.

“When we reach London, the driver tell us ‘you go out’. Then, we don’t know where we go.”

Hasibullah said officials had not told them where their accommodation was. His group later received support from volunteers, and they were eventually taken to a hotel in Norwich.

One of those volunteers, Danial Abass, told Sky News that he was on a routine walk to feed homeless people on Tuesday when he was approached by individuals who were “disoriented, desperate and completely lost” near Victoria coach station.

He said: “It was really a quite disturbing and distressing sight to see.”

Mr Abass added that many of the men were wearing flip-flops, grey tracksuits, identification tags around their hands and “big blue industrial bin bags with no jackets or socks”.

He took one of the men to Primark on Oxford Street and bought him jackets, shoes, clothes, hats and dinner from McDonald’s.

A Home Office spokesperson said: “The welfare of those in our care is of the utmost importance and asylum seekers are only released from Manston when we have assurances that they have accommodation to go to.

“We worked at pace to find accommodation for the individuals as soon as we were notified, and they are now in accommodation and being supported.”

Oil prices rose as much as 2% on hopes of China’s reopening and as OPEC+ maintains output cut targets
‘It’s a dirty game’: Prince Harry says only he and Meghan know the ‘full truth’ in new trailer for docuseries
Family of Harry Dunn ‘horrified’ US driver who killed him will not attend sentencing
Obama mocks Herschel Walker’s vampire remark
Elon Musk attacks San Francisco mayor in row over Twitter bedrooms for ‘tired employees’