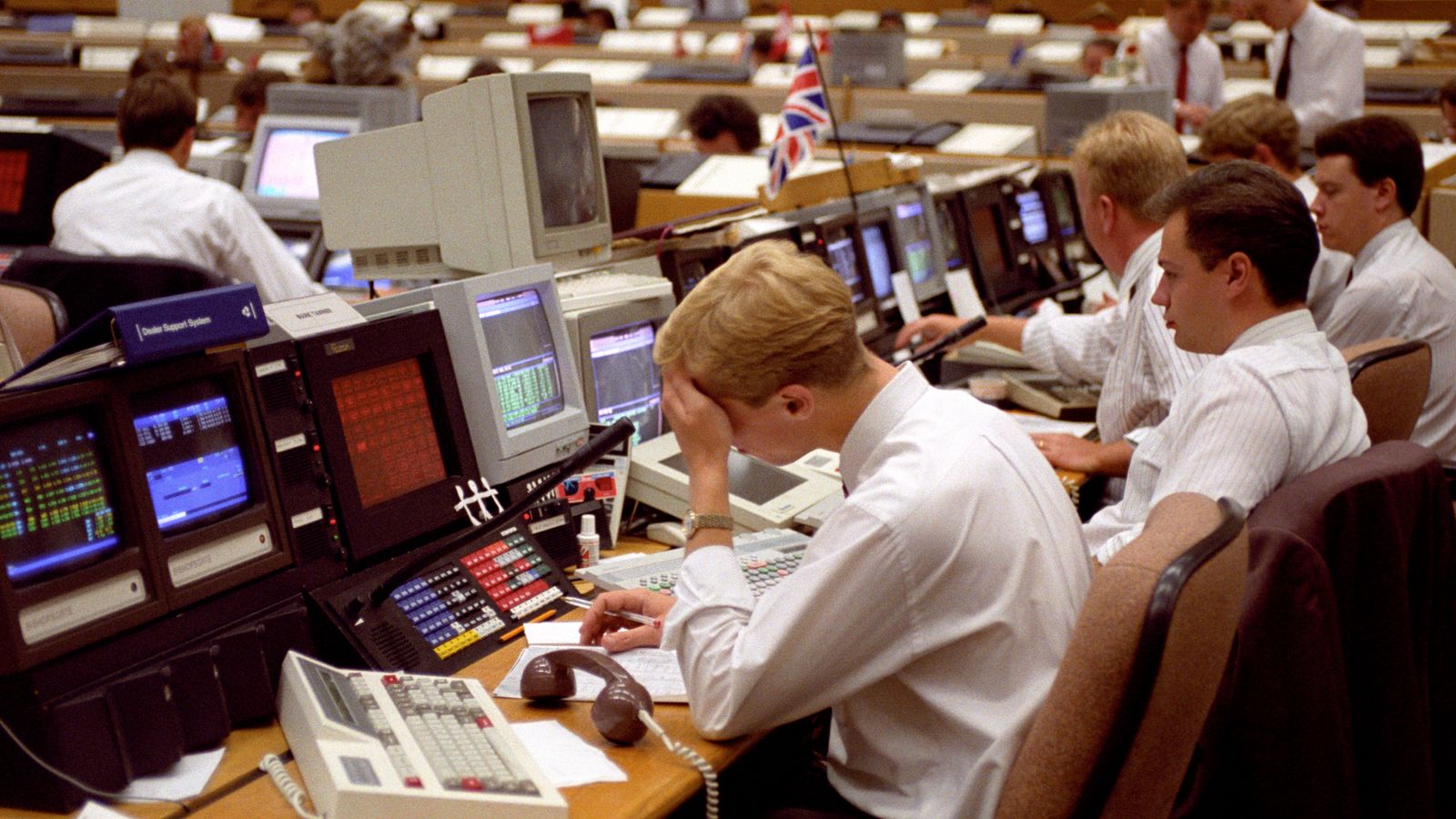 The disappointing retail sales figures for August, published on Friday, have sent the pound spiralling to a fresh 37-year low.

The pound has fallen by almost 16% against the US dollar during the last year.

Against the euro meanwhile, the pound fell to as low as €1.1405, a depth not plumbed since February last year.

This weakness in sterling comes in spite of the fact that the Bank of England has been raising interest rates more aggressively than some other central banks around the world although not, crucially, the US Federal Reserve.

But the timing of the latest decline is laden with irony for long-term sterling-watchers – because today, Friday, marks the 30th anniversary of one of the most traumatic days in the post-war history of the pound.

Wednesday 16 September 1992 is better known as “Black Wednesday” and no-one working in markets at the time will ever forget it.

It saw the Bank of England burn through nearly £10bn worth of reserves, a vast sum at the time, while interest rates were raised twice during the course of the day – all in a failed attempt to prop up the value of the pound.

The consequences, though, were more far-reaching than that. Black Wednesday was the day that the Conservative government’s painstakingly-built reputation for economic competence incinerated.

In that sense, it was the moment that first paved the way for the election of a Labour government – the first in 18 years – in 1997.

The background to Black Wednesday is worth going into in detail.

At the time, the pound was in the European exchange rate mechanism (ERM) – the system that yoked together the currencies of various European countries ahead of the creation of the euro. Under the ERM, currencies such as the French franc, the Italian lira, the German deutschemark or the pound were supposed to trade with each other in a tight range, described as “currency convergence”.

In the case of the pound, it was supposed to move against the deutschemark by no more than 6%.

As sterling had joined the ERM at a rate of DM2.95 to the pound, that meant it was not supposed to trade at more than DM3.127 or less than DM2.773. The main means by which sterling was supposed to trade in such a tight range against the mark was chiefly by setting UK interest rates (which in those days was set by the government and not the Bank of England) close to the level set by Germany’s Bundesbank.

If the pound looked like moving outside that range, the Bank of England was supposed to intervene, buying or selling the pound until the exchange rate came back within the terms set out by the ERM.

Most people thought that the pound had entered the ERM at too high a valuation against the deutsche mark – and that created a massive opportunity for currency speculators such as George Soros.

They had spotted that it was completely inappropriate for the UK and Germany to have interest rates at similar levels: the UK needed lower interest rates because it was emerging from a recession and a house price crash while Germany needed higher interest rates to see off the threat of higher inflation created by the heavy spending that followed reunification between East and West Germany.

The speculators already had their tails up: there were plenty of other strains in the ERM, following a referendum in Denmark earlier that year, in which Danes had rejected the Maastricht Treaty – the treaty that was supposed to ready the way for closer European integration and the eventual creation of the euro.

France had also announced a referendum on the treaty and a number of other currencies, notably the lira, were trading at close to the limits of the range under which they were supposed to.

Those strains came to a head when earlier in the month, Britain’s chancellor, Norman Lamont, had a very public argument with Helmut Schlesinger, president of the mighty Bundesbank. Things got worse when, on 15 September, Mr Schlesinger made some unguarded comments to a newspaper which were interpreted in some quarters as speculating that the pound would have to devalue – as indeed the lira had been forced to days earlier.

Mr Schlesinger insisted that had not been his intention and wrote in 2017: “I regret to this day that a general remark of mine, not focused specifically on the pound, should have played a role in aggravating sterling’s position.”

But the damage was done. Speculators like Mr Soros – who is reckoned to have made more than £1bn worth of profits from the event – had already been selling sterling in anticipation of a devaluation and, by the time Wall Street closed that night, the pound had fallen below its ERM floor.

The following day, the pound was hit by wave after wave of selling, prompting Mr Lamont at 11am to raise interest rates from 10% to 12% and then, three hours later, from 12% to 15%.

Heavy spending by the bank, using up what were reckoned at the time to be half the UK’s reserves of foreign currency, failed to stem the tide.

Mr Lamont announced that night that sterling’s membership of the ERM would be suspended and the second interest rate rise, to 15%, would not go ahead.

It was a humiliation for John Major’s Conservative government as great as sterling’s devaluation in 1967 had been for Harold Wilson’s Labour government. It was defeated by Tony Blair at the subsequent general election.

Sterling’s suspension from the ERM ensured the UK never entered the single currency – while its devaluation paved the way for a strong recovery that ensured Labour inherited a strong economy when it came to power. Some economists now refer to it as “Golden Wednesday”.

But Black Wednesday did not only pave the way for Labour’s election victory five years later. Many now see it now, also, as the moment that Conservative wariness of the EU spiralled into full-blown Euroscepticism.

As Mr Schlesinger himself wrote in 2017: “One might see this as the beginning of the UK’s slow separation from the EU that culminated in the Brexit vote last year.”

In Europe, meanwhile, there was also a response. Sterling’s ignominious departure from the ERM concentrated minds.

The French public, days later, voted in favour of the Maastricht Treaty.

And European governments concluded their planned integration was vulnerable so long as it was dependent on the ERM – especially as the episode had highlighted the Bundesbank’s reluctance to take action in defence of the currency bands.

They stepped up moves towards the creation of the euro.

Amazon hikes pay for warehouse and delivery workers
Kim Kardashian to pay $1m after being charged over crypto promotion on her Instagram
Here are the people who texted Elon Musk to offer advice or money for the Twitter deal
PGA Tour commissioner Jay Monahan talks about the tour’s future, Tiger Woods, LIV Golf and more
Citroen announces EV concept which uses recycled cardboard and has a top speed of 68 mph