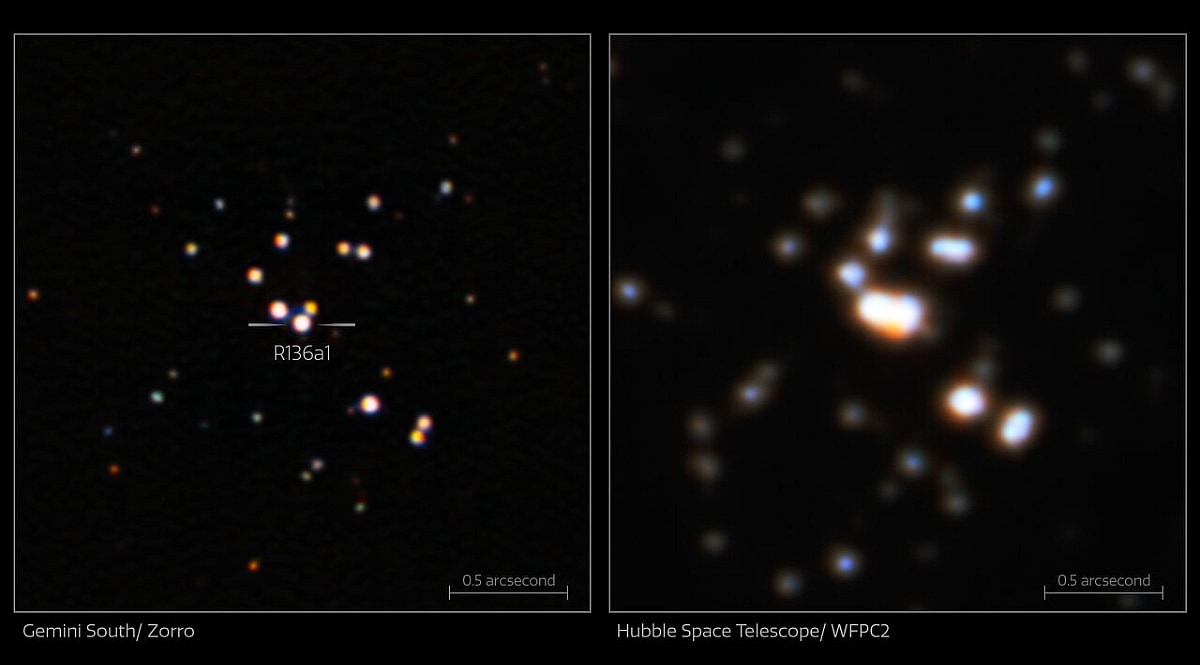 The distinction of being the most massive star ever discovered is held by R136a1, a behemoth star that is around 150 to 200 times the mass of the Sun. R136a1 is part of the R136 cluster, which is located in the Large Magellanic Cloud. In a new study, a team of astronomers have observed this cluster and, in the process, examined the largest known star. Finding out the upper limit of the stars is crucial for astronomers in understanding their cycles, the history of the galaxy, and much more.

Like the star it hosts, the cluster too is massive and has many bright newborn stars in it. The team has analysed the sharpest ever optical picture of the cluster and estimated the mass of some of its stars. These included the large R136a1, whose mass they estimated to be as high as 200 times that of the Sun.

Previously, astronomers would observe the cluster — which includes R136a1 — using the NASA/ESA Hubble Space Telescope along with ground-based telescopes. However, the images from these telescopes lask the sharpness to identify all the individual members of the cluster. Thanks to Gemini South’s Zorro instrument, which uses a technique called speckle imaging, scientists now have the sharpest-ever images of the R136a1 so far.

The images captured by the Zorro imager, suggest that R136a1’s size could be significantly lower than what was estimated before. Besides its size, the surface temperature of R136a1 is also eight times that of the Sun and has a radius forty times bigger.

By gaining an understanding of how common these giant stars are, astronomers can unravel the mechanism behind their formation. It requires a large amount of gas to collapse in a brief period to form a giant star this big. In addition, besides their complex mechanism, these stars also don’t live for long and thus become too hard to spot for astronomers. Examining the R136a1 star can hence provide an insight into the history of galaxies.