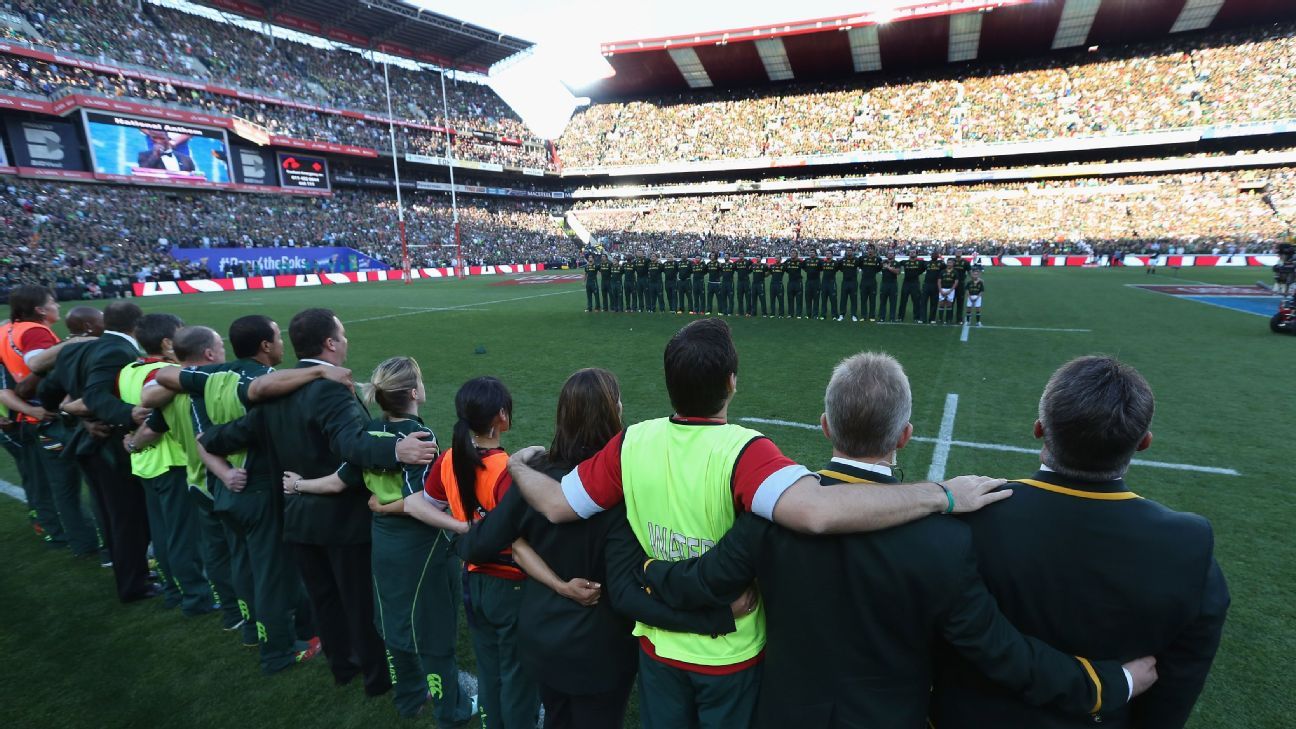 JOHANNESBURG, South Africa — Ellis Park; scene for the 1995 World Cup final that united the Rainbow Nation – and many years later the greatest Test of all time. Set in a sketchy part of Johannesburg it is one of rugby’s most iconic venues, the spiritual home of the South African game.

This weekend it hosts an under siege All Blacks team that’s lost five of their last six Tests.

In such fraught circumstances, there is no more daunting task than confronting the relentless world champions at their mecca.

A 25-minute drive from Ellis Park, former Springboks captain John Smit lost his 100th Test to the All Blacks in the first rugby Test in Soweto when he was left holding Ma’a Nonu’s boot as Israel Dagg claimed the match winner.

At Ellis Park, though, Smit led the Springboks to their 40-26 triumph in 2004 – a victory that, prior to last week’s 16-point success in Mbombela – stood as South Africa’s largest margin against the All Blacks since 1928.

It is fitting, then, that an excerpt from Smit’s autobiography, Captain in the Cauldron, resurfaced this week to provide a timely insight into the hostilities that await the All Blacks.

“Ellis Park is such a special place for the Boks and hell on earth for the visiting teams,” Smit wrote. “It’s no secret that they feel like they are stepping into a lost valley in hillbilly country.

“Opponents have told us over a beer how they get a sinking feeling as the bus gets further away from the comfort of their Sandton hotel and passes through the dodgy, run-down areas surrounding the stadium. We’ve heard of fans spitting and banging on their bus as it enters the ground.

“Inside, the stadium is so well designed that the crowd sits on top of you and gets totally involved in the game. The fans really let rip and at the risk of sounding snobbish, there’s something scary about a lot of them. The Aussies reckon Ellis Park is straight out of The Jerry Springer Show and that the fans look almost capable of murder.”

Having attended several Tests at Ellis Park I can attest to that intimidating cauldron. Nowhere in the rugby world have I felt more like an outsider. Manic fans, all draped in green, have a fury in their eyes as they bay for blood from foreign teams. Their towering presence looms large over referees, too. The deafening noise from the magic South African anthem to the final whistle is more akin to a Woodstock concert.

In 2013 I was fortunate to attend Ellis Park when the Richie McCaw-led All Blacks prevailed 38-27 in the greatest Test of all time.

South Africa, under then coach Heyneke Meyer, needed a bonus-point victory in the final Rugby Championship Test to claim the title.

The breath-taking contest finished with the All Blacks conceding yellow cards to Liam Messam and Ben Franks and somehow emerging victors after scoring five tries to the Boks’ four. Further fuelling the pre-match atmosphere, a 747-plane shot over the stadium multiple times to replicate the surreal scenes from the 1995 World Cup Final.

All Blacks captain Sam Cane recalled that 2013 match, when he came off the bench in the closing stages, as he now attempts to lead an unlikely revival from his embattled team.

“I remember my first time there with the All Blacks they flew the plane over nice and low – that’s a vivid memory,” Cane said this week. “You’ll have another 30,000 than last week and we’re up higher so the air is slightly thinner.

“I remember driving in and the fans are slapping on the bus and making plenty of noise. It’s a hostile environment but we quite like playing in places like this that really test you. It feels like 15 out there versus the Springboks and the whole crowd so they’re massive challenges.”

Altitude is yet another factor the All Blacks must combat. Ellis Park sits 1,720 metres above sea level which significantly strips available oxygen from the lungs.

Even running on a treadmill your chest rapidly tightens and dried blood forms in your nose overnight. Translate those minor quirks to the brutally savage Test match arena and the physically taxing element, on top of the mental challenge, becomes clear.

Many of this All Blacks squad are yet to experience Ellis Park at fever pitch, either.

Beauden Barrett has – he scored a brilliant individual try off the bench in that 2013 Test. With Richie Mo’unga promoted to start at No. 10 this week the All Blacks will hope Barrett can replicate those feats.

“It’s a great place to play rugby. It stings when you breathe, when you’re under fatigue, the ball travels further,” Barrett said. “The intensity of the Springboks given the hostility of the crowd – there’s green jerseys everywhere in the afternoon. It’s rugby at its best. We love those challenges. Certainly the position we’re in now our backs are against the wall. We’ll be going out there fighting, giving it everything, we can’t wait.”

Mo’unga also boasts successful history to draw on here, having led the Crusaders to their drought-breaking Super Rugby title in 2017 at Ellis Park.

“It’s the home of South African rugby. Nothing compares to it for me. This is the pinnacle, where you want to be playing,” Mo’unga said. “The noise with 60,000 is intense. At altitude you feel the blood in your lungs and you can taste that. Understanding the history that’s gone there before it’s a privilege to have the opportunity to play there.”

At this point in their downward spiral the All Blacks appear incomparable to their 2013 predecessors or the 2017 Crusaders team.

Despite their horror form slump belief within the All Blacks is not an issue but on their body of recent evidence, a dramatic transformation at Ellis Park, in rugby’s toughest assignment, seems an improbable dream.