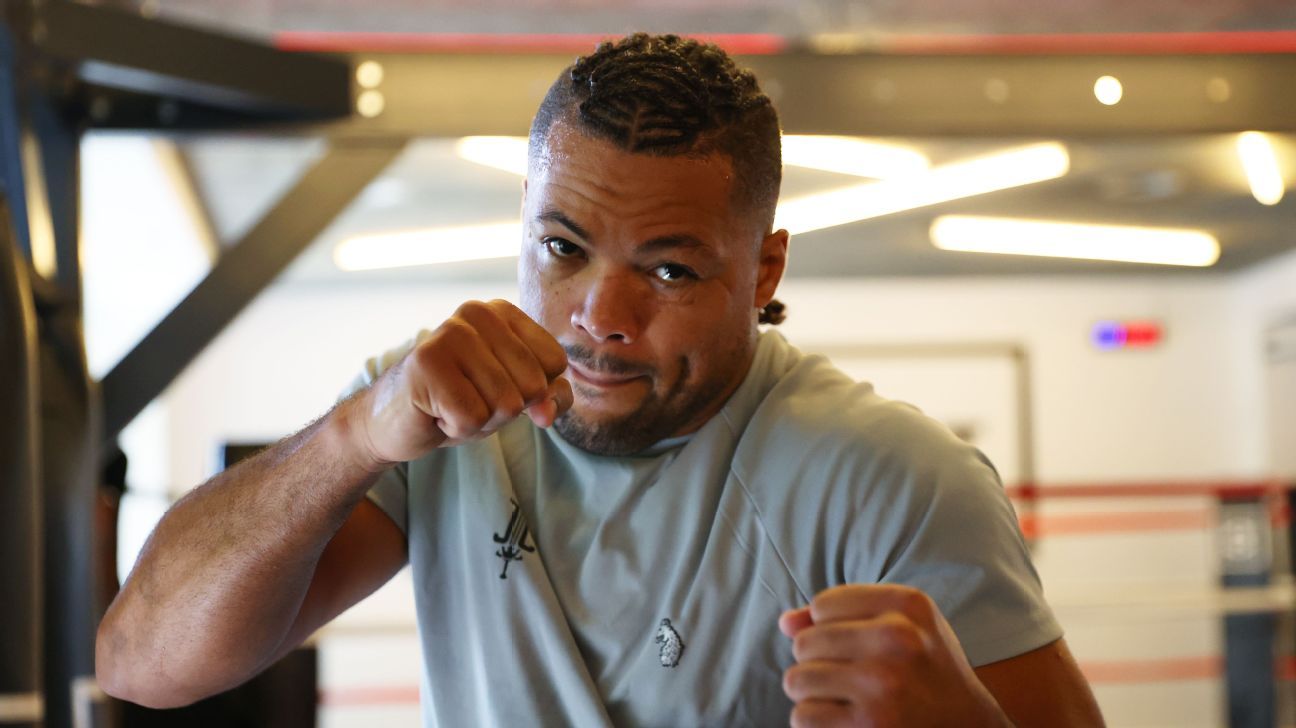 Joe Joyce still hopes he can land his dream fight against one of his English rivals: Tyson Fury or Anthony Joshua.

Fury, the WBC world champion, insists he is retired, while Joshua faces Oleksandr Usyk on Aug. 20 in a rematch after losing the WBA, IBF and WBO belts by decision to the Ukrainian last September.

Despite the uncertainty over the futures of Fury (will he box again?) and Joshua (will it still be a fight Joyce wants if he loses to Usyk again?), the undefeated Joyce believes he may be just one fight away from his first world title shot.

“The Juggernaut,” who has won 12 of his 13 fights by KO, faces Christian Hammer at OVO Arena Wembley in London on Saturday (ESPN+, 2:30 p.m. ET), needing to win to maintain his No. 1 and No. 2 rankings with the WBO and WBC, respectively.

Top Rank Boxing is now on ESPN and ESPN+. Subscribe to ESPN+ to get exclusive boxing events, weigh-ins and more.

With all four major titles shared between Fury and Usyk, the only way Joyce will miss out on a title shot in the next year is if Fury reneges on his retirement promise and faces the winner of Usyk-Joshua 2 to decide an undisputed world heavyweight champion.

“Tyson hasn’t given up his belt yet. If his WBC belt is given up, I would be first in line to fight for it, probably against Deontay Wilder,” Joyce, who turns 37 in September, told ESPN. “Tyson is enjoying some family time now, but I think he is waiting to see the outcome of Usyk-Joshua. He’s won and done everything in the sport, but if £500 million is on the table, I’m sure he will fight again.

“If the winner of Usyk-Joshua doesn’t want to fight me, they will have to give up the WBO belt and I will get to fight for it.”

Joyce knows Fury, Joshua and Usyk well since he’s shared the ring with all of them.

“I sparred Fury just before his first fight with Deontay Wilder [in December 2018],” Joyce said. “I’ve not sparred with Joshua since 2017, and I fought Usyk as an amateur, so I know them all quite well.”

Joyce sparred many rounds with Joshua when they were both part of the Great Britain Olympic boxing squad, and suffered a first-round stoppage loss to Joshua early in his amateur career in 2011. Joshua won the Olympic super heavyweight gold medal a year later, and Joyce stayed amateur until he won the Olympic super heavyweight silver medal in 2016. Joyce and Joshua continued to spar early into Joyce’s professional career. Joyce lost a unanimous decision to Usyk in 2013, a year after Usyk won the heavyweight gold medal at the 2012 Olympics.

“Definitely from recent performances, Tyson is the best out of the three of them,” Joyce said. “Usyk has put himself up there after beating Joshua, and then it’s Joshua.”

Joyce has been training with Cuban coach Ismael Salas in Las Vegas for his first fight since stopping Carlos Takam in July of last year. Hammer (27-9, 17 KOs), 34, from Germany, has lost three of his last five fights and is not the most formidable opponent available, but Joyce sees this as important preparation for a world title fight.

“It’s a warm-up fight and the ideal fight for me right now,” Joyce said. “It would have been Joseph Parker, but it’s become a bit complicated with him and that fight has been postponed. I wanted to fight in July, so this is a good one for me. He’s durable and has been in with some experienced fighters.

“There’s been talk of me fighting Dillian Whyte and Tyson Fury too. I just need to get rid of Hammer and these fights can happen.”