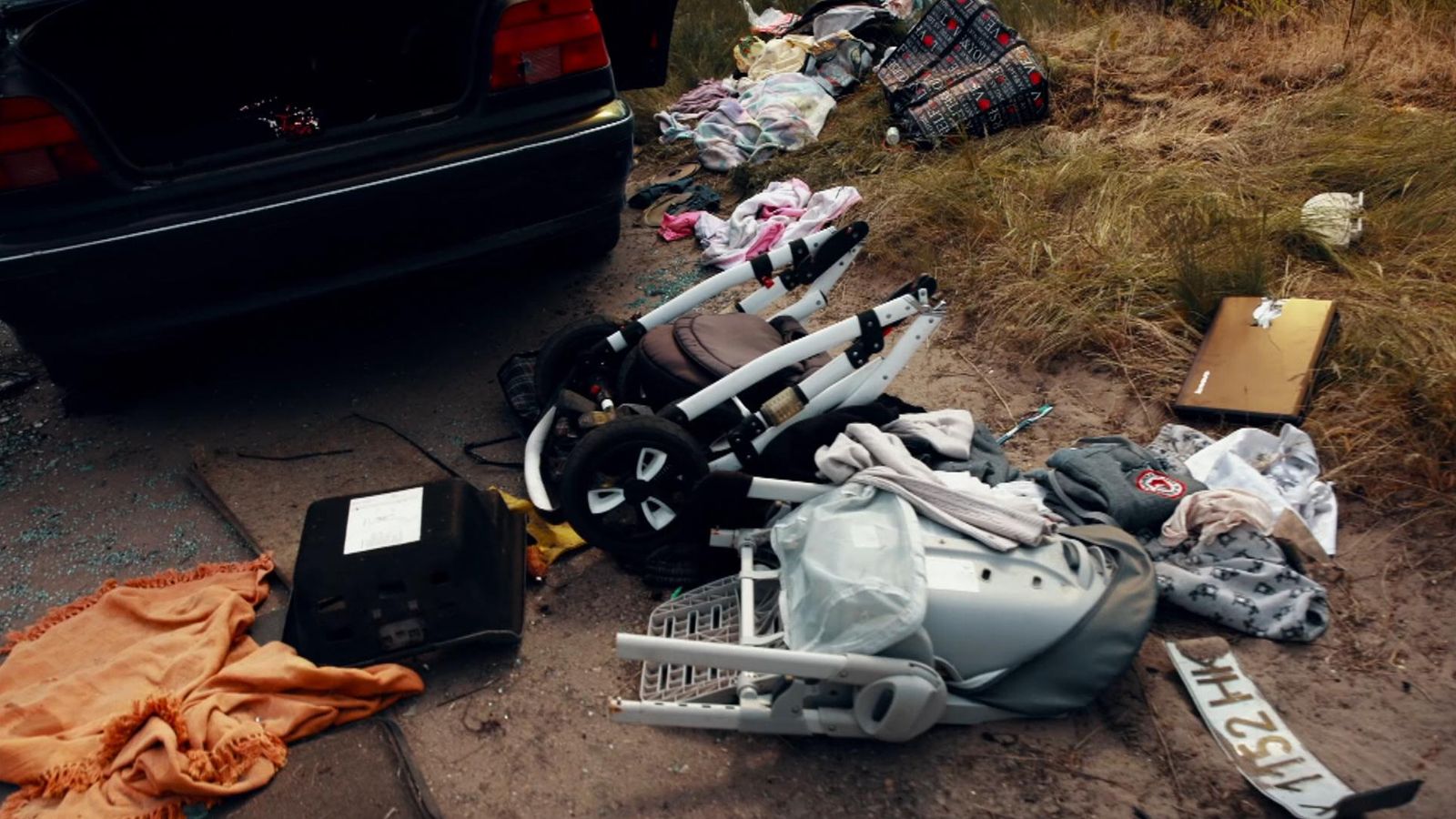 In this slow grinding war of artillery, the front lines move back and forth in a deadly dance – but on the outskirts of Kharkiv the Russians are in retreat.

The villages here have been battered and so too have the Kremlin’s forces, with remnants of armoured vehicles burned up on the side of the road.

The soldier we’re with, Lieutenant Vladyslav Moschanskyy, proudly tells us it is one of Russia‘s most sophisticated weapons as he points toward the charred chassis of a tank.

“You can see the Tank T90 AM, this is the most modern tank of the Russian Federation,” he says.

The Russians’ bunkers where they’d tried to hold their positions are also smashed, and vehicles they’d used have been splattered with bullets. The occupiers clearly left in a hurry after a massive fight.

Amid all this, residents are still trying to flee to safety and a bus carrying elderly people shuttles towards us.

Inside, Irina Lysenko is crying uncontrollably. They are the relentless tears of the recently bereaved.

In between sobs, she explains her husband was killed in the shelling.

“The shell landed in the neighbours’ house. He was hit by the blast wave and the next day his heart collapsed and he died. I’m shocked and we were forced to bury him as we could. We were living in our holiday home,” she said.

All of the people on the bus have spent months living under Russian occupation.

‘The bullets were whizzing above our heads’

Oleksander Harpus says despite the danger he was reluctant to leave.

“The bullets were whizzing above our heads. First shots then explosions. Everything was going over our heads,” he says. “So we left everything. We could not decide to leave but thankfully the volunteers convinced us because our lives are most important.”

But even though Russia’s occupation is broken here, it is far from safe.

The military guide we follow has warned the hill road above the river is still exposed to enemy tank fire as we move further towards the new front lines.

Getting to the recently liberated village of Staryi Saltiv now involves driving at breakneck speed down frighteningly open roads.

‘The car was destroyed… everyone died’

What we see when we arrive is from another world. Spindles of smoke plume as they rise apocalyptically into the sky. It is a truly dreadful scene.

The twisted carriages of what were once cars line the roads. What happened to the civilians is beyond disturbing.

One of the vehicles was packed with toys and baby clothes. They are strewn across the road.

Sergeant Igor Reznikov says the family was trying to escape along with the others.

“This is a direct hit by the tank which is standing on the top of the hill where we were,” he explains.

“The convoy of the cars was driving and it was hit. Here you can see where the shell landed and the destroyed the car. Everyone died.”

All the time there’s the whoosh of rockets overhead.

The advances here are a sign of success for Ukrainian forces.

But elsewhere Russia continues to make ground, with both sides trading blows and as more heavy weapons are moved to the front, in a conflict which is deepening every day.

With reporting from producer Neville Lazarus in Kharkiv