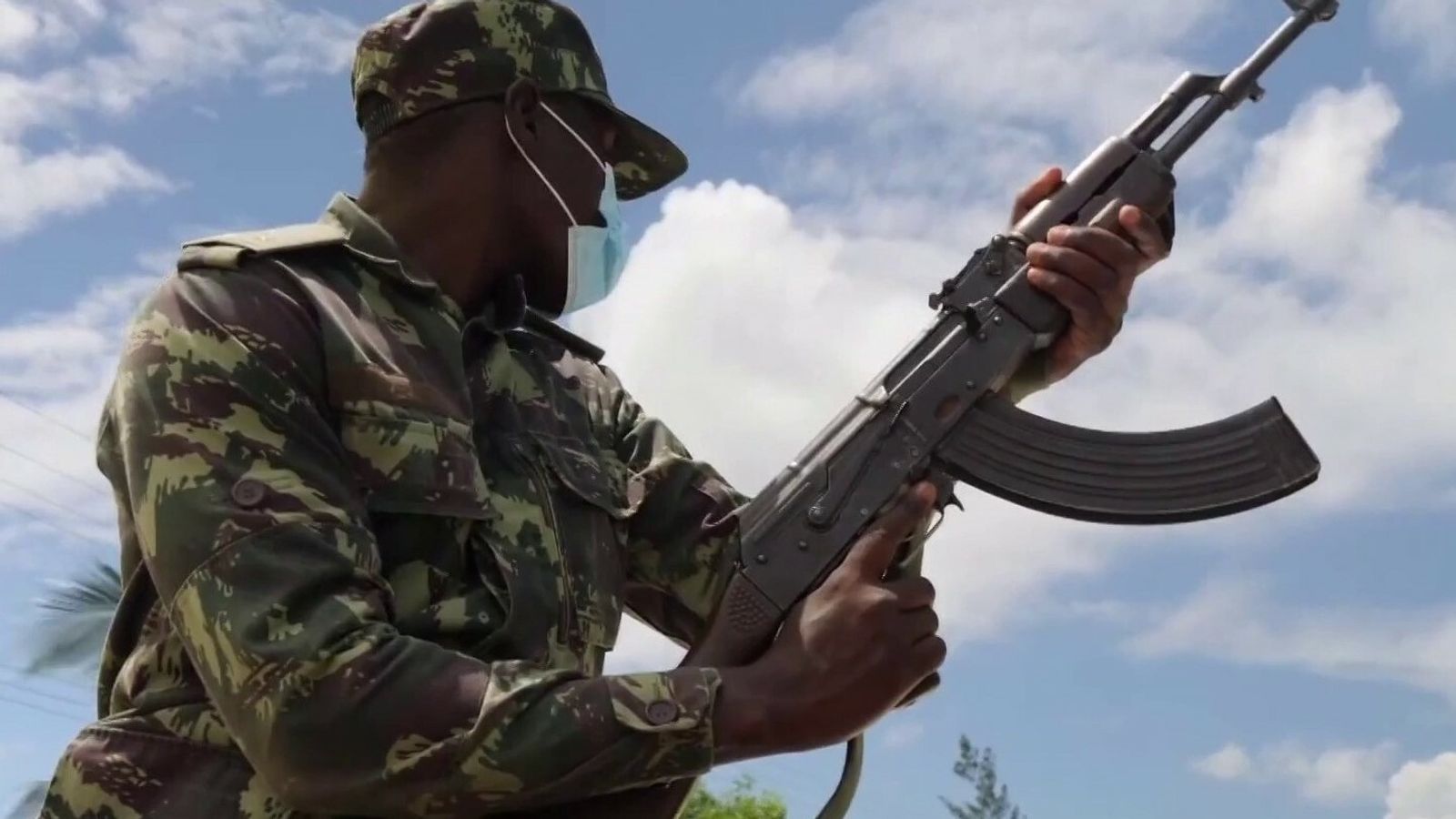 Southern Africa leaders will gather in the Mozambican capital of Maputo over the next few days to try to hammer out plans to counter the growing threat of terrorism across the region.

The country’s president, Filipe Nyusi, says his government is working with their international partners to try to assess their needs after the most serious terror attack since the start of the armed insurgency four years ago.

A convoy of contractors, journalists and soldiers were taken into the town of Palma, which was overrun by fighters a fortnight ago, to demonstrate how the army has reclaimed the area.

Days after Sky News was last here, there’s already a tangible difference. Many more villagers are returning and the area is swamped with soldiers. It is now effectively a militarised zone.

Colonel Agostinho Muthisse told us he was confident the town and the surrounding area had been cleared of militants but admitted his troops were dealing with an enemy they did not know.

“We still don’t know the reason why they are fighting or who the enemy is. We are trying to clarify who is supplying these terrorists,” he said.

He believes the fighters have withdrawn – possibly as far as 70km (43 miles) away – within reach of the strategically important port of Mocimboa da Praia, which they have controlled on-off since August last year.

Several days after the Palma attack, the Islamic State claimed it had carried out the operation.

But many analysts believe the IS flag is just one of convenience, with the Mozambique group having no identifiable leader, no ethos or ideology and no clear motives.

We went with the army to the Amarula Lodge where nearly 200 expats, foreign workers and locals hid in fear as militants lay siege to the hotel.

The complex has been subjected to multiple lootings since and every room we entered had been ransacked and stripped of most valuables, even the mattresses from every bed.

In the car park there were still two wrecked cars, the tarmac was strewn with papers and an office printer had been left abandoned at the hotel entrance.

There was no sign of the abandoned vehicles which those trapped inside the hotel had tried to flee in.

A convoy of 17 vehicles was hastily organised by those under siege at the Amarula, who were becoming more and more desperate about being rescued.

But almost as soon as they exited the Lodge gates, the convoy was ambushed by militants waiting outside.

Among those killed was a Briton from Somerset, Phil Mawer, aged 59, whose body was later recovered from one of the abandoned vehicles.

Only seven vehicles managed to escape.

We were led by villagers to a tree immediately opposite the Amarula Lodge entrance. It was here, they said, that a massacre took place.

An army official told us they’d found 12 bodies laid out under the tree.

All of them had their hands tied behind their backs and their heads cut off. The villagers had buried them there, under the tree in a mass grave.

The military has yet to identify them, but thousands of people are still missing.

In the chaos of the attack and amid the indiscriminate killings and mass exodus, there are an estimated 20,000 or more unaccounted for.

One contractor who was returning to Palma with us to check on his construction yard was aghast at the destruction the extremists had wrought on his business.

“I’m finished with Mozambique now. I will try to sell my company. I’m not staying. I’ve got family and I have to take care of them,” he added.

His view will be alarming to the Mozambican authorities who are trying to bolster confidence in investing in the country.

Palma is near the $60bn liquefied natural gas (LNG) project in the Afungi Peninsula – the single biggest investment in Africa.