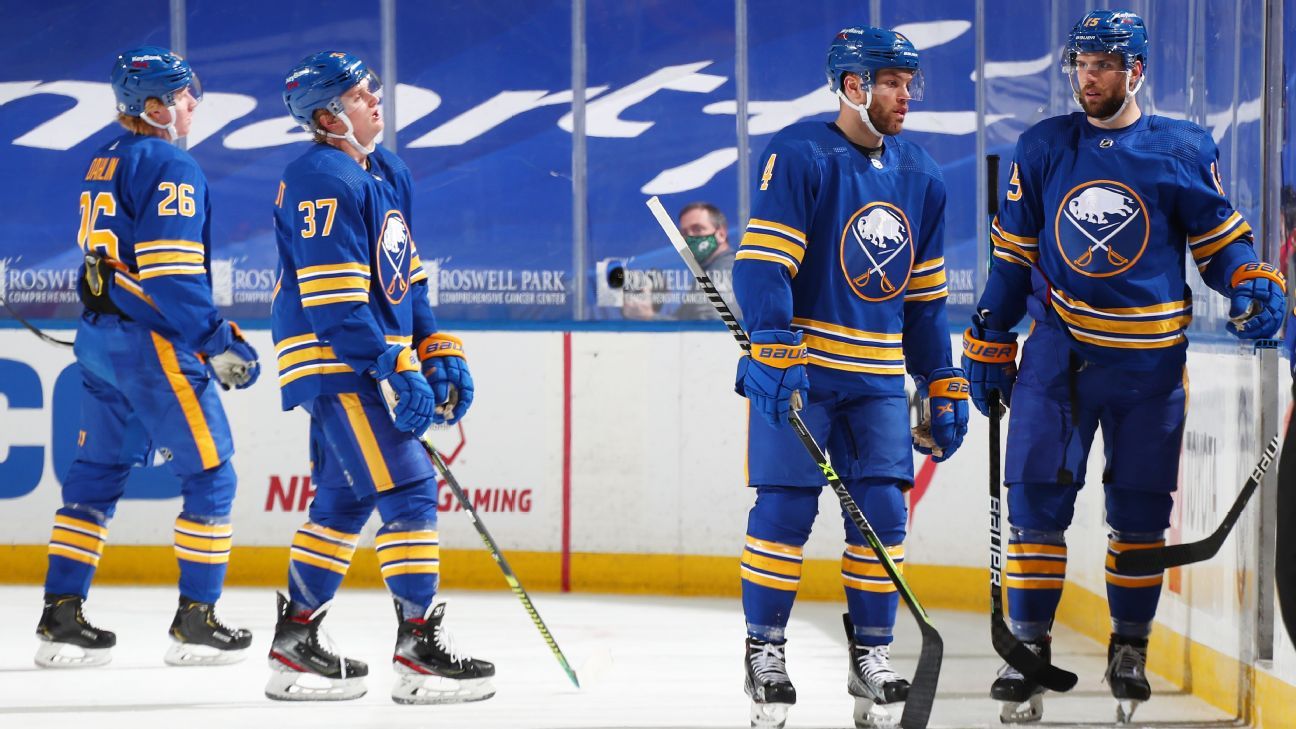 The Buffalo Sabres are 0-15-3 since Feb. 25. They own the record for the longest winless streak of the shootout era (since 2005-06) and have tied the 2003-04 Pittsburgh Penguins for the most consecutive losses — including overtime and shootout losses — in the 21st century.

How did they get here and how worse could it get? Plus, how do they get back on track — and could a Jack Eichel trade be forthcoming at some point down the road?

ESPN’s Emily Kaplan and Greg Wyshynski discuss it all:

Wyshynski: Let’s start with a definition of terms. The NHL is insistent that the Sabres are on an 18-game “winless streak” rather than a “losing streak.” To wit: The standings say their current streak is “one overtime loss” instead of “L18,” because the NHL only considers it a loss when the defeat occurs in regulation.

I know this is a real wacky concept, but a loss is a loss, and the Sabres have 18 of them in a row. The confluence of confusing standings format and having a technicality undercut a sensational story is peak NHL, really. What’s your take on this streak, Emily?

Kaplan: If you lose in overtime, it still means you lost. I’ve never heard a hockey player treat an overtime point as a win. My honest take: I hate the debate over semantics almost as much as I hate this streak itself.

And when I say I hate it, I mean I hate how it’s affecting players. You can tell it’s really grating on them. After Monday’s third-period collapse (when the Sabres blew a 3-0 third period lead), Brandon Montour used the words “embarrassing” and “brutal.” Rasmus Dahlin claimed the team had a “panic attack.”

Interim coach Don Granato is trying to instill positivity, but these are deep-rooted issues. Captain Jack Eichel (upper-body injury) has been out of the lineup for 11 games with no timetable to return. One of general manager Kevyn Adams’ big offseason gets, Eric Staal, has already been traded. The other, Taylor Hall, is likely to follow. And all I wonder is: How are they going to dig themselves out of this?

Wyshynski: Optimism and the 2021 Buffalo Sabres go together like an artisanal candle and a pile of rotten fish. But they had a heartbeat on Monday night against the Flyers before things went sideways, playing two of their better periods in the past month.

“If we hit the open net, would we be talking about panic?” Granato asked. “I would say we made some mistakes. I wouldn’t say we panicked. We got a little overexcited.”

The coach knows he has taken over a team searching for a glimmer of hope. After six games on the job, he is starting to find little moments, little stretches to build on in a film session. It’s elementary and embarrassing for a collection of NHL players, but it’s the only way out of this.

Buffalo has one more game with the Flyers, and then it has four versus the Rangers and Devils, teams against which the Sabres have wins this season. I wouldn’t be surprised if Buffalo goes winless for a 19th game. I would be surprised if this streak isn’t over by the end of that set of games on April 8. Emily, do you agree that the 1980-81 Winnipeg Jets‘ record of 30 winless games is safe?

Kaplan: I’m with you. The Sabres are not a good hockey team — and will get worse as players are removed from the lineup ahead of the trade deadline — but they aren’t totally incompetent. Since the streak began, the Sabres have an expected goals for percentage of 44% at 5-on-5, per Natural Stat Trick; that’s not great by any means, but it’s also not the worst in the league over that span. The Coyotes, who are on a three-game winning streak and one point out of a playoff spot in the West Division, have an even lower rate. The Sabres’ Corsi for percentage at 5-on-5 in that span is 26th in the league, with two surefire playoff teams (the Wild and the Jets) behind them.

So there are signs of life. Buffalo goalie Linus Ullmark is back after a monthlong absence, and he is quietly been battling hard. A huge lingering question is: When do the Sabres get Eichel back, if at all this season? The 24-year-old is the franchise’s most important player, and the emotional heartbeat of this team. It’s been pretty mum on the injury front. Eichel is still rehabbing and feeling better, per Granato, and the team is “hopeful” he can return this season.

But perhaps the better question is: What is Eichel’s future in Buffalo beyond 2021? I couldn’t imagine this possibility a year ago at this time, but do you think there’s a legitimate chance the team trades its captain?

Wyshynski: There are actually two separate questions here. The first is whether Eichel has hit his tipping point. Last summer, he was frustrated. I’m not sure the world’s most comprehensive thesaurus could conjure up the word to properly capture how Eichel was feeling after watching the Sabres plummet to a .221 points percentage while a coach he admired was fired. If he wants out, the Sabres have to honor that request.

If he wants to stay … do the Sabres still trade him anyway? Centers of Eichel’s age, ability and contract term rarely become available. There are teams such as the Kings and the Rangers that could restock the Buffalo cupboard quickly in a trade for Eichel. I tend to believe the Sabres are better off using Eichel as the foundation for whatever their next build looks like. But it might not entirely be up to them. Emily, what’s the best plan moving forward for the Sabres?

Kaplan: First, the immediate plan: Acquire as many prospects and draft picks as possible ahead of the April 12 trade deadline. Make unemotional decisions — which means perhaps parting with recent top draft picks who have thus far underperformed.

What we have yet to mention: This season isn’t an isolated issue for the Sabres. They’re mired in a nine-year postseason drought (soon to be 10), which is the longest in the league. The bandage fixes in free agency haven’t helped; they need to build from the ground up. Compounding this issue: Buffalo made massive cuts to its scouting department in the pandemic, and it hasn’t filled a lot of those positions. The Sabres haven’t had a scouting presence in Russia for the past several years. They don’t have a scout in Finland. They also don’t have a scout assigned to the WHL or OHL this season (though the OHL season remains in flux). They’re relying heavily on video scouting for the 2021 draft, which might not be ideal.

Organizationally, the Sabres need to shore up that area first, but it will mean even more of a financial commitment from team owners Terry and Kim Pegula. What the Sabres crave most is stability. They can’t keep cycling through coaches and GMs. They need one voice, one direction, because all of this pivoting has led them nowhere. Greg, do you see reasons for optimism that this could be a quicker fix?

Catch NHL games streaming live every night (and on replay) this season on ESPN+. Click here for the upcoming schedule and to learn how to subscribe.

Wyshynski: I was speaking with an executive from another team this week who expressed something that startled me. “I don’t think the Sabres are that far off,” he said. “A new coach who can change the attitude around the team and they’re not nearly as bad as this.”

They had the wrong coach. They had a season interrupted by COVID-19. They’re now stuck in a losing streak of historic proportions and don’t know how to pull the nose up from the tailspin.

I acknowledge that looking at the Sabres and pondering their potential for 2021-22 is like walking into dilapidated, haunted house and measuring for an open-concept kitchen/dining room, but … I kind of like the flooring and the fixtures? Am I off-base here?

Kaplan: Well, sometimes I think you’re off-base (like your insistence that Central Jersey is, in fact, a real place) but not here.

The hardest thing to acquire in the NHL is a No. 1 center. The Sabres have one on their roster, who is signed to a long-term deal and about to hit his athletic prime. (Obligatory reminder that Eichel is only 24).

Buffalo can use the rest of the season to evaluate if Ullmark can be the answer in goal or if they need to look elsewhere. Dahlin, the No. 1 pick of the 2018 draft, was touted as a generational talent. Sure, it’s fun to say the Sabres “ruined him,” but he’s only 20. Perhaps they rushed his development. Even more likely: They underestimated how being surrounded by a losing culture can negatively impact a young player. Get a better support system around him and there’s still time for him to flourish.

But maybe I’m an optimist. Maybe this still has to get worse before it can get any better.